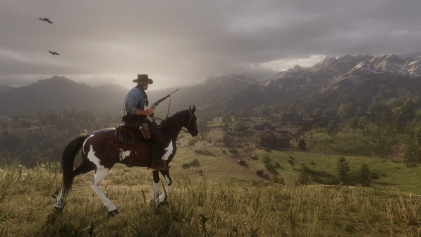 We’ve reached a point at which Rockstar’s games are basically beyond reproach. And while we’ve pointed to GTA: SAN ANDREAS as the best of the bunch in a piece on the ‘5 Best Ever PlayStation Games’, the argument can be made at this point that RED DEAD REDEMPTION 2 has set a new bar for the company.

RDR2 is a universally beloved game that has earned one glowing review after another for years now. It will surely go down as one of the best video games of the last decade, and really of the 21st century so far. One specific reason for its acclaim is the sheer breadth of activity it provides. The Gamer wrote up a handy list of just how many things there are to do in RDR2, from hunting and fishing, to robbing banks, to trimming your beard or playing a guitar around a campfire. All of these things occur (or an occur at least) within the flow of the game, and provide an incredibly complete, “second-life” sort of immersion.

Alongside the core activities though, RDR2 also thrives on side quests and mini-games. And among those mini-games, one that’s generated significant attention online is poker. RDR2 is not the first game into which Rockstar has injected a healthy dose of poker. But it may have the most extensive in-game poker scene we’ve seen, which is why we want to take some time to tell you how to get the most out of it if and when you dive into this marvel of a video game.

Know Where to Play

The first step toward enjoying the poker scene in RDR2 is, naturally, finding it. This won’t be too tricky at first, because there’s actually a mission in the game (“Who Is Not Without Sin”) that involves poker at the in-game location Flatneck Station. Once you’re through that mission, you’ll be able to play at Flatneck. Thereafter however, you can also find and participate in poker games at additional locations known as Blackwater, Tumbleweed, Valentine, and St. Denis.

RDR2’s poker games aren’t too complex, but you’ll still enjoy them more if you go in with an understanding of some basic terms. A glossary on poker terms by Poker.org makes it easy enough to review these until you know the language, so to speak — clearing you up on phrases like “small blind,” “big blind,” “flop,” “community cards,” and a few others you’ll encounter in RDR2 poker games. Rest assured, this is not an assignment for in-depth studying. But nailing down a handful of terms will make the games come more naturally.

Know the Rules to Hold’em

You’ll need to know the rules to Texas Hold’em as well, given that this is the variety of poker favored in RDR2. The good news is the basic rules are about as easy to learn as those simple terms! In Texas Hold’em, each player is dealt two cards. Then, three community cards are dealt (comprising the “flop”). Eventually fourth and then fifth community cards are added, and each player composes the best possible hand from his or her two personal cards and the ones everyone can use. In between these steps, players have the opportunity to place or match bets, or to “fold” and sit out until the next hand.

This is just a quick point, but do remember as you get into the RDR2 poker scene that your cash counts! It’s not worth anything in the real world, to be clear. But within your RDR2 adventure, the money you play poker with is the same money you may depend on to make purchases for your character. So be mindful that your gains or losses have some impact on the rest of the game.

Lastly, bear in mind that you can play poker with other gamers though RDR Online as well. You don’t have to, to be perfectly clear. The average table you sit at in RDR2 involves randomized games against AI characters. However, there is live competition through RDR Online. A write-up on Twinfinite.net explains that you have the option of joining a public game with strangers or setting up a private online game with opponents of your choosing. So really, you can make online poker through RDR2 whatever you like!

We hope this guide will help you to get the most out of one of the most enjoyable mini-games we’ve seen in quite some time!